STORMWATER OR RAINWATER management is becoming a routine component in land development projects, particularly along riparian corridors where rainwater runoff surge and silt are degrading water quality and disturbing the natural ecology.  This surge water may be temporarily detained in a structure or tank for a short period of time or permanently retained in a shallow pond or underground structure until absorbed into the soil or evaporated.

Grading and paving disrupts the historical stormwater flow path and the natural soil absorption process. The resulting soil erosion and transportation of oils and trash into the drainage patterns must be remediated.  Surface water speed and volume are reduced by directing the rainwater surge to a holding pond or tank system and then releasing it more slowly over a period of hours or days to meet acceptable natural or historic runoff rates.  Storm surge tanks can also be used in conjunction with underground structures that allow the water to be absorbed by percolation through the soil.

Runoff ponds hold the water but do little to remove floating trash and oil. In addition to being high maintenance, ponds are often an attractive nuisance as well as a breeding area for insects.  Shallow ponds generally take up more space or valuable real estate than underground storage tanks.

Darco manufactures underground fiberglass cisterns that can be used for stormwater management. Underground tank systems can be designed to intercept sand, floating trash, and oils as well as store and release the clarified water at approved rates.  Recommended upstream concrete interceptors are very helpful in removing floating trash, sand, and oil.  Periodic maintenance is required on such interceptors. Sand, oil, and floating trash accumulation must be monitored and removed, as necessary. Fine suspended solids will pass through an upstream interceptor but generally drop out while water is held in the large quiescent tank system.  Silt accumulating in the bottom of tanks must be occasionally flushed and removed as well.  Partially clarified water from a stormwater detention system can be stored for future irrigation during seasonally dry months or for use in an attractive water feature, Koi pond, or waterfall as part of an architectural design at the entrance of a building. 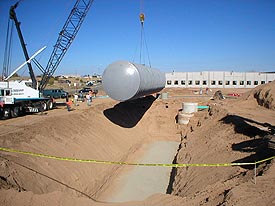