As local, regional and state governments and planning authorities adopt regulatory and policy positions that encourage, incentivize, and require more sustainable and efficient structures, on-site water management is becoming an increasingly attractive and cost-effective means to achieve these goals.

The US Green Building Council’s LEED® certification is the industry standard for recognizing the adherence to a strict code and ethos of putting efficiency and sustainability at the forefront of the design process. Through LEED® certification, projects can access rebate and incentive programs, attract high profile partners and tenants, and gain visibility and notoriety in the community.

DARCO Underground Fiberglass tanks can help your project meet many of the metrics established by LEED® for water management, Building Design and Construction, and Operations and Maintenance.  DARCO tanks can store waste water, gray water, storm water, and even potable drinking water. DARCO tanks can also be fitted with filtering components so that the water collected can be reused for landscaping, fire suppression, and other secondary use applications.

Our direct bury underground fiberglass tanks also offer opportunities for Thermal Storage (TS) projects in which significant volumes of cold and/or warm water can be stored to provide load shifting and on-peak support to climate control systems. Thermal Energy systems are ideal for taking advantage of off-peak utility rates due to Time of Use (TOU) rate structures that are being rapidly adopted across the country.

Fiberglass tanks do not rust, corrode, or degrade, making them a natural choice for projects designed to function effectively and efficiently for years to come. Coupled with the cost effectiveness and time savings of fully constructed, performance tested tanks delivered on-site, DARCO Underground fiberglass tanks are a natural application for LEED® certified projects.

For more information please visit our website at darcoin.com

20 REASONS WHY A DARCO FIBERGLASS (FRP) UNDERGROUND WATER STORAGE SYSTEM SHOULD BE THE FIRST CHOICE TO MEET YOUR DRINKING WATER, STORM WATER, AND FIRE PROTECTION NEEDS

As an increasing number of electrical utility providers around the country pilot variable rate systems designed to lower peak loads and associated pricing, California will soon be taking on the biggest test yet by putting over 20 million consumers on time-of-use (TOU) rates.

A typical electrical utility rate is made up of a monthly fixed service charge and a per-kWh rate for the electricity a customer uses, regardless of when that kWh is used. Increasingly, state utility commissions and PUD’s are working toward TOU rates, which charge more for electricity when it costs more to deliver due to supply and demand. If customers shift their usage to the lower cost times, they can lower their bills and utilities can see lower on-peak demand.

When properly designed and deployed, TOU rates can help customers save money by shifting their use away from high-priced, high-demand time periods to off-peak hours. TOU rates can help utilities reduce their expenditures by lowering the total peak demand they must meet while moving flexible customer demand toward periods when energy is in greater supply on utility grids.

In 2015, in response to a number of successful pilot programs, including a landmark 2012 to 2014 Sacramento Municipal Utility District (SMUD) TOU rate pilot1, the California Public Utilities Commission (CPUC) ordered the state’s three investor-owned utilities (IOUs) to transition to “default” TOU rates by 2019, requiring customers pay TOU rates unless they opt out.

San Diego Gas & Electric (SDG&E) will begin moving its customers in March 2019, and Southern California Edison (SCE) and Pacific Gas & Electric (PG&E) were given until October 2020 in order to prepare their billing systems. SMUD will begin a system-wide rollout of default TOU rates October 1, 20192.

The move towards TOU pricing is not unique to California utility districts. In fact, nationwide, IOUs and utility commissions are piloting, and implementing TOU pricing.  As a result of the move towards TOU pricing there is an increasing incentive to capitalize and maximize the use of “off-peak” power. This is where Thermal Energy Storage (TES) systems can become an attractive option to help shift loads from expensive “on-peak” hours to more economical “off-peak” rates.

Thermal Energy Storage systems function as a “thermal battery” that stores cold water chilled during evening and nighttime off-peak hours. The use of mechanical refrigeration and evaporative chillers during off-peak hours takes advantage of the lower TOU utility rates.  Storing large volumes of low-cost chilled water in direct bury fiberglass tanks is implemented to compensate for the building loads during the daytime, which effectively shifts operation costs of the HVAC system to the off-peak TOU rates.

DARCO underground water tanks has over 30 years of experience in the design and manufacture of direct-bury fiberglass water tanks. We have worked with TES engineering firms in the research and development of such systems. Please contact us to review how stored thermal energy can help your project take advantage of TOU rate structures in your area.

This month we will be discussing the fundamentals of thermal energy storage (TES) systems.

At the functional core of any HVAC system design is the necessity to move heat in to or out of the system. Mechanical condensers, heat pumps, and evaporative cooling towers all serve the same purpose of moving heat from inside of the system to outside of the system or vice versa. The energy it takes to move heat in and out of the system, as well as the energy contained in the heat itself is effectively lost as most designs have little to no ability to capture the waste heat energy removed from the system for use when needed. This is the economical, environmental and efficiency argument for thermal energy storage systems. Such systems are designed to capture, store, and make available the energy contained in waste heat. DARCO has designed, constructed, and delivered several systems that take advantage of waste heat generation. These systems are designed to store heat removed from the system in the form of hot water stored in large, DARCO spec, direct bury fiberglass tanks.  The stored hot water is then available as heat energy to be moved back into the system as needed.

The following two examples are indicative of the type of system that DARCO has years of experience with.  Please see our website for additional information on products and applications as well as contact information for our sales and technical team.

This system was part of a newly constructed high school in a small town in NW Oregon.  The climate of the Willamette valley is temperate with high temperatures rarely exceeding the mid-eighties and freezing temperatures occurring infrequently and rarely for extended periods of time. Due to the proximity to the Pacific coast, daily temperature changes can be quite wide. It is not uncommon to find temperatures in the forties at dawn and in the mid-eighties by the afternoon. This kind of temperature swing is ideal for a TES system that can boost the effectiveness and efficiency of an HVAC system responsible for heating a building at night and cooling the building during the day. The system design for this project consists of a large 50,000 gallon DARCO spec direct bury fiberglass tank buried under the gymnasium.  The tank acts as a thermal reservoir.  Cold water stored in the tank from the night time heating of the building is used to boost the efficiency of the daytime cooling period. As the building is cooled throughout the day, heat is drawn out of the system and stored in the tank to be used to boost the effectiveness and efficiency of the night time heating period.

This system was designed to boost the efficiency of an existing photovoltaic (PV) solar power array as well as capture waste heat for use in the resort and hotel.  Solar panels have an optimal temperature range at which they operate most efficiently. This temperature is easily exceeded in large arrays and therefore water cooling of the arrays is a common practice. This is another example of waste heat being lost from the system.  DARCO was able to partner with the mechanical systems engineers to provide a 40,000 gallon DARCO spec direct bury fiberglass tank to capture the heat drawn off of the PV array.  The captured hot water is used through heat exchangers to preheat domestic water supply for the hotel and casino as well as provide ice and snow melting capabilities for the sidewalks and driveways of the resort campus.

DARCO is looking forward to future projects and applications for thermal energy storage systems.  Please contact us with your TES needs and allow us to collaborate on storage solutions 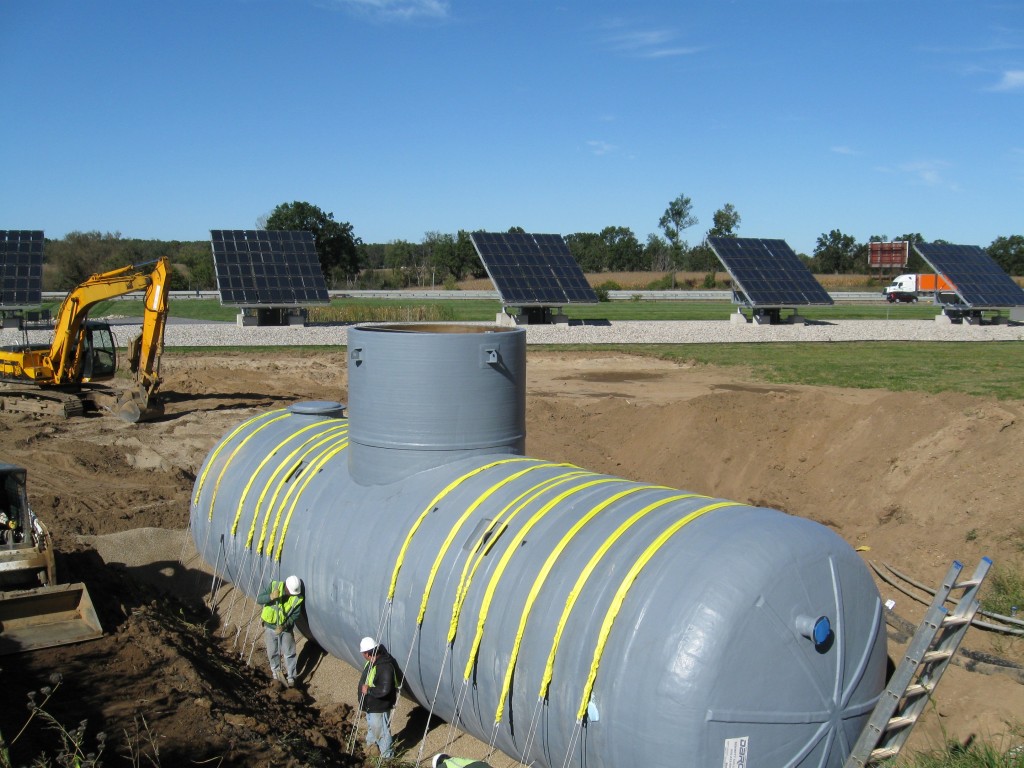